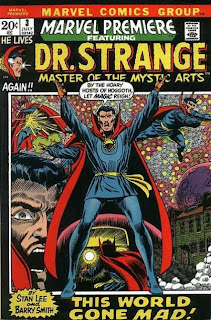 Ok, I am gonna try this whole crazy blog review thing. I've been collecting comics in general for 20+ years(most of my life, in fact), and have always had a particular interest in comics from the 70's and early 80's(known in certain circles as the "Bronze Age"), but have only in the last year or so really pursued some of these great books.
I really only care for Marvel books from this time, too. I think, for the most part, DC books weren't so very good during this time(for me, the only exception being Kirby's Fourth World stuff which is outstanding). I'd originally taken to lesser known characters' titles(Black Goliath, Spider-Woman)or less familiar titles featuring A-list characters(Marvel Two-in-One, Marvel Feature) because they just seemed so oddly humorous to me. I've since started going after bigger game like The Avengers and Fantastic Four, but I still have a particular fondness for the not- as-popular characters.
Getting to the point, while researching storylines of older books, I've become engrossed with various blogs pertaining to bronze age comics. One in particular mentioned a disdain for Dr. Strange. The claim being he is an uninteresting character or writers have a hard time making him interesting. Well, I do love Dr. Strange(even what is currently happening to him)and it got me to thinking about a particularly cool storyline that ran in Marvel Premiere.
Dr. Strange resurfaced in Marvel Feature #1 with The Defenders after his previous series ended. Soon after, he had his own book(of sorts)in the form of Marvel Premiere. Things start off in #3 as the good doctor can't shake the feeling of impending doom following him around(boy have I been there). After nearly being hit by a truck, Strange makes his way home, but still he feels a sense of menace around him so he decides to do a little recon in his astral form. He quickly discovers some evil looking mist engulfing his sanctuary and so calls upon the Ancient One for answers which he delivers in a frustratingly cryptic way. Strange tries to make his way make to his body, but is somehow trapped in the room. He blasts his way out only to find his body being possessed by an unknown entity. Strange's astral form and physical form battle briefly and his body is returned to him after the entity possessing it unsuccessfully tries to escape through a thick plate glass window(ha!). Strange isn't out of harm's way yet, though, because his body having gone limp suddenly plummets out of the freshly shattered window. Strange's astral form speeds to recover his body and does so just in time, but when he lands, it is not on the same plane where he started. Amongst the foreign landscape, Strange encounters a version of himself trapped inside a tree(no, really)and it goes on to repeat the same thing the Ancient One said about how to find his quarry. It takes pretty much no time at all before Strange sees the threat who is quickly dispatched and reveals that he is only doing the bidding of another, but who? He's not saying, but rest assured thing only get more interesting after this issue.
Stan Lee does the dialogue from a plot and artwork by the great Barry Windsor Smith. Here, he is still honing his style and he no longer seems to want to be Jack Kirby. You can really see some flashes of what Smith will be doing in the next decade or two just as you could in some of his later Conan issues. Though this isn't one of my favorite issues, it does lead into what I think is some of the best Dr. Strange issues ever(though I've not read every Dr Strange book). Stay tuned!!!
Posted by Kid A at 2:27 PM