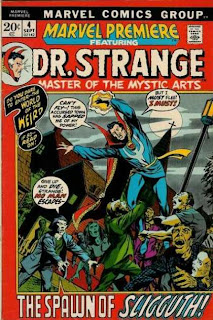 So, here we are. The story that I feel could have been the blue print for a thousand Dr. Strange stories. Stephen arrives at his Sanctum Sanctorum after his recent battle only to discover his study has an uninvited guest. Expecting another showdown, Strange flings back the curtain only to reveal a very unthreatening man named Ethan Stoddard. He has strangely helped himself to the doctor's fireplace as his servant Wong lay in slumber. This does not sit too well with Strange and he immediately sounds the gong which raises Wong to his post. After being treated to an uncharacteristic verbal thrashing by Strange(which he immediately stops Wong and apologizes for), Wong retrieves bandages for Stephen's wounds and tea for their uninvited guest.


Things settle down and Stephen learns of Ethan's reason for showing up to his home. Apparently Ethan's fiancee, Bethel Doan, has not been heard from in three weeks and his letters are being returned unopened. She had returned to their hometown of Starkesboro located somewhere in New England. Ethan and Bethel are in graduate school and Bethel was doing research for her thesis on the occult arts in America and she was a fan of some of the papers Stephen wrote. The library in Starkesboro is supposed to have many books on the subject found nowhere else, including a little something called the "Thanatosian Tomes" which an excerpt from was quoted at the beginning of this story. Stephen, being understandably apprehensive about the young man's story after recent events, gives Ethan the once over with the Eye of Agamotto and his story checks out. The probing renders Ethan unconscious and when he comes to, Dr. Strange has prepared an overnight bag and tells Ethan they are going to Starkesboro.


The bus stops at some truck stop type restaurant so the passengers can grab a quick bite. It is here that Ethan tells Stephen about his hometown. The townspeople are mostly descended from an obscure religious cult that fled England in 1670 to escape persecution much like the Puritans had. He goes on to talk about the group's leader, Caleb Starke when he realizes that Stephen is too distracted by the hot dog he is eating(awesome, I know)to pay attention to much of Ethan's story.

Fast forward to the evening, and Stephen and Ethan are the only passengers left on the bus as it rolls into the foreboding looking town of Starkesboro. At the same time in Manhattan, Wong invokes an incantation at his master's request to summon the Ancient One. Wong asks him to use his astral projection at midnight to visit Strange so he can ask the Ancient One about the Thanatosian Tomes and the Ancient One agrees. Strange and Ethan arrive at the only hotel in town and Strange makes note of the "odd timing of their worship service" as he looks out his window onto the church's steps and sees people spilling out. There is a great bit of foreshadowing here when Stephen notices all the townspeople seem to have the same features, but chalks it up to them all being descended from the same bunch of settlers.

The hour of midnight strikes and Stephen prepares himself for projection, but something is preventing him from rising from his body. Through sheer force of will alone he is able to break the hold and meets up with the Ancient One. He tells Stephen about "a cosmic obscenity that slumbers!" cults, and "lost races that wait for the day, the hour, to end that slumber!" He says he is fighting this war for humankind and tells Stephen he needs to do the same and their meeting ends.

The next day begins with an encounter as Ethan runs into someone he knew from childhood. The man looks not quite human and is none to happy to see Ethan. He does tell them where the library is located though, so Ethan is able to continue his search for Beth. Stephen decides to investigate the church since it is right next door and discovers as he passes the threshold to the church the spell that disguised him dissipates to reveal his Dr. Strange garb. He exerts his will and fights to keep his disguise going and soon comes upon an altar with an inverted cross and reptilian symbol on the wall behind it. Strange recognizes the symbol as the mark of Sligguth, who is supposed to be the God of "serpent folk of pre-cataclysmic Valusia".

Meanwhile, it appears Ethan is striking out at the library as he gets the cold shoulder from the attendant, but then spots who he thinks is Beth sitting at a table with her back to him. He calls out to her, but she does not respond at first. He approaches her and makes her look at him and he sees she has begun to transform and even speaks differently. Ethan runs to the church and finds Dr. Strange. They start to piece together what is going on when they suddenly find themselves surrounded by the townspeople outside the church. They begin chanting Ethan's name and the true reason for Strange being there comes to light: Ethan lured him there so they could destroy Dr. Strange! Ethan goes into a trance like state when he spills the beans and commences attacking Stephen. Stephen's power grows ever weaker as it is being depleted by outside forces and soon even his levitating cloak fails him. He plummets to the ground and the townsfolk break through the church door. Stephen seems powerless to stop them and they announce he is one of the hindrances that prevents their God from awakening. They plan to do something about and the story is to be continued.

Archie Goodwin takes over the writing chores and the mood he creates is quite unsettling with the use of foreshadowing. The art is credited to Barry Smith and Frank Brunner, but it looks to be mostly Brunner, which looks pretty terrific. Brunner would later take on art chores on the next Dr. Strange solo book and his stuff is pretty distinct.

This entire storyline just strikes me as the perfect scenario for Dr. Strange. I would love to see a series where he was more of a "mystic detective". This story gives credit to Robert E Howard, and I know authors back then played off of each other and shared ideas, but I am more familiar with Howard Phillips Lovecraft and this story is very much in that vein. The idea of some old town in New England with its villagers worshipping some entity from long ago is really creepy. I think it's a better fit for Dr. Strange to investigate things of this nature as opposed to the cosmic villains or the more super heroey stuff. He's currently had his power greatly reduced in the Marvel universe so I think him doing something similar to what's been going on in X-Factor would be a capital idea. Forget the epic clashes with Dormammu. Give me the impending horror that lurks just on the periphery of human view any day. That's the curtain Dr. Strange should be pulling back. Any ways, that's the end of that tirade, but I will be back with the low down on Marvel Premiere #5 very soon, hopefully.