While scouring the internet for 70's Jack Kirby stuff, I came across this short-lived series from DC. Jack Kirby made several contributions to the run, including its' inaugural issue. Atlas tells the slight tale of an extremely strong young man named, yes, Atlas and his follower, Chagra. It opens with them in a town marketplace as Atlas gives a demonstration of his pow 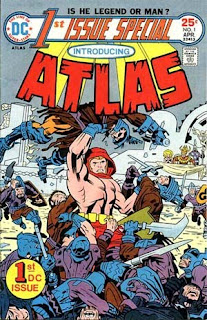 er by crushing two huge stones in his hands. Chagra beckons to anyone in the crowd to challenge Atlas in combat. The town's strongest is offered up only to be felled with a single blow from Atlas. The townspeople believe the fight was rigged and begin to surround Atlas and Chagra only to be interrupted by a nobleman trying to pass through. Atlas dispatches the nobleman quickly only to be set upon by the king's soldiers. Atlas grabs a human shield and before the archers can attack Atlas, a voice is heard from off panel which triggers an extended flashback sequence from Atlas.

We are taken back to when Atlas was a child and his village was attacked by slavers. Atlas hid and watched helplessly as the men killed his father and took his mother away. Atlas is captured by the slaver's leader, Hyssa, but surprises him by dealing a blow powerful enough to incapacitate the slaver. Atlas manages to escape only to be captured again by a stranger hiding in the nearby field.

The stranger turns out to be Chagra and Atlas once again gets to show his strength and breaks away from Chagra. He goes into his family's hut and comes back out with a glowing crystal. Chagra recognizes the crystal as belonging to a group of people from the Crystal Mountain. The leader carries a fragment from the mountain and when the leader dies, he must pass the crystal on to his successor. Atlas is now in possession of the fragment and Chagra decides to become his subject.

The story goes through a couple more encounters giving Atlas a bit more character and further establishing his and Chagra's relationship before returning to the present of the story finding the voice that triggered this elaborate flashback belongs to King Hyssa! Hyssa remembers Atlas from his slaver days(those things kind of have a way of coming back to haunt you, don't you think?). It looks as all Hell is about to break loose, but that is where the story ends. There is a bit from the editorial urging readers to write in if they want to see more of Atlas, but, sadly it seems, this was not to be. There is also an article called, "The Story Behind the Story" and goes into the myths and legends of Gods and Jack Kirby and it kind of gives you an idea of what he was going for with this story. I definitely see some elements better mined earlier in New Gods. Kirby's art here is good, with inks by D. Bruce Berry. His lines don't seem to be as bold as Mike Royers and has quite a bit of fine linework. It's not what I'm accustomed to seeing his Kirby's 70's stuff, but is still strong. All in all, for a relatively obscure book, I find it be worth checking out. I was able to pick his other issues from this series as well and I'm looking forward to reading them soon.
Posted by Kid A at 12:17 PM 2 comments: