In an Interstellar Burst, I am Back to Save the Universe! 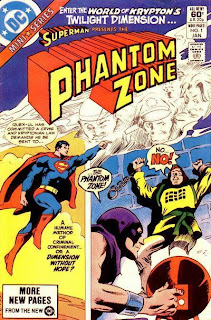 In what is certain is certain to be another in an ongoing segment at Bronze and Beyond central, I have unearthed another lost classic of yesteryear from Gene Colan's stint at DC in the 80s. Much like the previous book I wrote about in the previous post, I was unaware there was a Phantom Zone comic, much less a 4 issue mini-series, and less still that Gene Colan had drawn such a thing.

In the opening tale of the series, "The Haunting of Charlie Kweskill," we see Perry White finding the titular character asleep at the printing press of the Daily Planet. Apparently, this is uncharacteristic of Charlie so Perry sends Charlie home. For some reason, Charlie just hasn't been getting much sleep at night. Charlie has been suffering from visions of "a planet half a galaxy away". Unsurprisingly, the planet is Krypton and Charlie is treated to visions of one villain after another being tried and exiled to the phantom zone by the business end of a device invented by Jor-El . We see some of Krypton's motliest of villains being sent away: renegade scientist Jax-Ur who was testing his new guidance system and nuclear weapon by launching it at a meteor, but instead blows up Wegthor, a moon of Krypton with colonists(oops), or General Zod for his unsuccessful invasion of Krypton. These and many others Charlie bears mute witness to as they are all sent to the place where they can see everything but touch or communicate with nothing outside of the Phantom Zone. That is, unless everybody concentrates really hard in unison. All of Charlie's visions culiminate in the revelation that he himself is an exile of Krypton and his real name is Quex-Ul! It seems Charlie was a poacher on Krypton and took the horns of rondors to use in a business venture to create cellular regeneration stimulators that can heal people of all maladies(kinda sounds like scheme Kramer would come up with if he were evil). Charlie then sees the prisoners of the Phantom Zone exerting a mental hold over Jor-El who is stricken with fever and susceptible to their mind attacks(I'm thinking those cellular regenerating units weren't such a bad idea, after all). As Jor-El is about to smash his Phantom Zone projector, his wife stops him and the council decide to blast the projector into space, thereby condemning all its' inhabitants to a life of etherealness.

Charlie's dream always ends here, and so that holds true this time as well. Charlie comes to inside of S.T.A.R. labs where he is unsure of how or why he is there. Zod and his crew are exerting their mental hold over Charlie and guiding his hands "from beyond" as it were to build a new Phantom Zone projector to break them out. Meanwhile, Clark Kent overhears that Charlie was having a problem at work and was sent home. I guess they have a history and Superman is the one responsible for releasing Charlie(and Mon-El)from their exile. He goes to check on Charlie and catches him firing up the projector and is just a second too late to stop him. Zod and the others are released and Charlie and Superman are now stuck in the Phantom Zone!

Having next to no knowledge of any of these characters, I found myself enjoying this tale. Colan's layouts are dynamic and his storytelling is clear, but Zuniga's inks are a bit sketchy at times. Colan's work here isn't quite as dark as he is known for, which works out well for a story told in the Superman universe, granted a somewhat dark tale, but it's Superman nevertheless. The story itself is actually pretty neat the way it comes together. It has a Dickens/sci-fi/EC bend to it and not at all what one would think of when they think of a Superman story, especially from this period. I've not read a great deal of Gerber-penned stories(though I did enjoy his Omega: the Unknown series). Any ways, I am greatly looking forward to reading the next installment. This was a blind buy on eBay and for $6.00 for the run, I can tell already it was money well spent. Now, onto Nathaniel Dusk!
Posted by Kid A at 5:44 PM